Our racing engines are produced at our own factories with tightly controlled tolerances to give you maximum reliability with unbeatable value and performance. We have a wide range of four stroke engines to suit your needs: 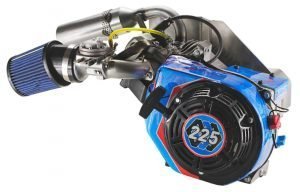 Our TPP-225RS is the ultimate in four stroke power under 250cc.  Developed in close cooperation with the EC Team, the TPP-225RS gives you more than 15 horsepower, making it the best engine for dirt racing.  The TPP-225RS  features a PVL digital ignition coil limited to 6,500 rpm, an HW series racing carburetor specifically calibrated to the 225RS, a billet connecting rod and flywheel for improved strength and reliability and our enhanced Tillotson® block with extra support for higher power output.  The TPP-225RS also featured in our new T4 Series monobrand class.  Our TPP-225RS-SB1 is the short block version of our 225cc engine.  It has become a fast favorite  for mini kart enthusiasts.

Our TPP-212R is a Predator class racing engine designed to meet federation competition standards.  Like the 196R, the TPP-212R comes with  a Tillotson® Racing head, either a stock or PK-1B carburetor where permitted and enhanced racing valve springs for maximum performance and consistency right out of the box. The TPP-212R also feature our enhanced engine block for more reliable performance.

For non-federation powersports, our TPP-212E is a high performance, EPA certified engine that offers more torque and horsepower than a Honda GX-200 or Predator 212 engine.  And that’s not just max torque – the TPP-212E features a hemi head and an optional TillotsonTCT mechanical fuel injector for unparalleled acceleration and a more constant torque curve compared to a standard carburetor. 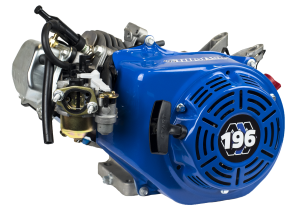 Our TPP-196RS is a sealed clone class competition racing certified for racing in NKA and TAGUSA competition. It features our enhanced block, Tillotson® Racing camshaft and cylinder head, PK-1B carburetor and your choice of a billet or cast flywheel.   The sealed class promotes fair competition with a race tuned engine straigh from the box.   Once the seal is broken, the engine is no longer eligible for sealed classes, but the engine can be used in many other clone and open class competition. 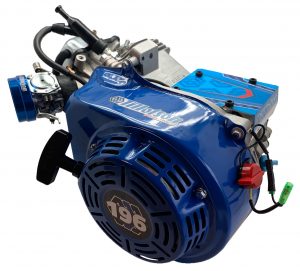 196R-CADET clone engine was developed to offer a very user friendly and reliable engine for the Cadet Karting categories (aged 8-12 years old).  The engine is the same as our TPP-196R but restricted with the use of our HS-323A Carburetor specifically calibrated to this engine.  The combination of the engine and carburetor offer fantastic throttle response and bottom end torque, which in turn makes the engine extremely driveable throughout the power band. The engine offers 5.5Hp, the optimum level for the cadet age category .