How would you like to win a drive at Tillotson’s T4 World Cup!?
Announcing Tillotson T4 Esports Series on Rfactor2 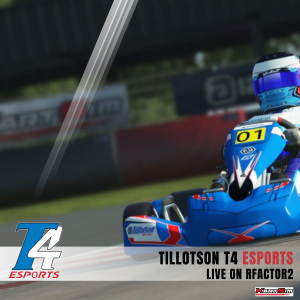 Held over three days of racing, the Tillotson T4 Esports Series will place drivers right at the very heart of what it means to race competitive karts. Utilizing the newly released Tillotson T4 Series kart in rFactor 2, drivers will have an opportunity to participate in up to four qualification sessions on the day of each race event, with the top 24 drivers progressing to ‘Split 1’ of the Semi-Final races. Points will be awarded for each race (Saturday and Monday), with the highest scoring 30 drivers progressing to Finals Day on Tuesday evening. Points scored across the two semi-final events will be used to set the grid positions on Finals Day.

Tillotson T4 Esport Series is not only an exceptional opportunity to sample this mighty content in rFactor 2, but thanks to the generosity of KartSim and Tillotson Racing, we also have an exceptional prize pool of goodies to give away to one lucky winner.

Not only does the championship victor take home the KartSim Pro UK and EU packs, worth £899, but they will also win an exclusive trip to watch the real world Tillotson T4 Series World finals in Dublin!

If the series winner is European or UK based, they will get flights, accommodation and entry into the event as reward for winning the series. Unfortunately, this offer is open only to European and UK based competitors, should a driver outside of Europe take victory spoils, they will still earn the full KartSim Pro UK and EU packs.

As an additional and somewhat incredible opportunity, alongside this excellent prize pool, the highest ranking driver at the end of the series with a current and active kart racing licence will be given a place on the grid in the real life T4 World Cup! Flights, accommodation, kart and starting ticket will be provided – all you have to do is turn up, and test your skills on the world stage!

Entry is simple and open to anyone with an active copy of rFactor 2, and the KartSim consumer content used throughout the series. Run exclusively in the rFactor 2 Competition System, all players have to do is simply sign up for the series within the Competition System, then set a time in any of the four qualification sessions that precede each race. The top 24 lap times will form the top split for each Semi-Final event, with further splits populated from the 25th driver onwards.

Drivers will score points in each semi-final race, so although participation in both events is not mandatory, if you want to score a top 30 championship finish and a place in the Finals Day broadcast, running both races is highly recommended!

The KartSim Consumer content and the T4 virtual model is available here: