The Podium Is Calling !! 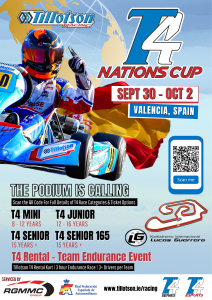 Tillotson has announced that the third annual T4 Nations Cup (formerly known as the T4 World Cup) will be taking place in International Kartodromo Lucas Guerrero, Valencia, Spain on September 29-October 2. The event is promising to be bigger and better than ever, with two new classes and the addition of the RGMMC group servicing the event.

Last year, the event ran with three classes: T4 Mini, T4 Junior, and T4 Senior classes. This year the event features two new additional classes, T4 Senior165 and the T4 Rental-Team Endurance class, where teams of a minimum of 3 drivers will compete in a 3-hour endurance race in the new T4 Rental karts. These are the same karts that will be used in the FIA Motorsport Games, giving drivers a chance to experience endurance racing at the highest level. The event also features a Nations Cup trophy, where the country with drivers accumulating the highest point total will be awarded the Nations Cup.

For the past two years, the event was held in Tillotson’s home country of Ireland, where drivers, and their families enjoyed the hospitability and spirit of the Irish people. Now that Covid restrictions have largely been lifted, Tillotson is taking the event to Spain. “It has always been our goal for the Nations Cup to travel around the world,” noted Tillotson President Charles A. Demirjian. “With the help of RGMMC and RFEDA, we are looking forward to bringing the event closer to customers on the continent in beautiful Valencia, Spain.”

T4 Esports Series
The Nations Cup is not the only event in the T4 Series getting attention. Last year Tillotson launched its T4 Esports program with the KartSim game which runs on the Rfactor2 platform. For 2022, Tillotson is running a six-race championship T4 Esports Series with both a Junior and Senior category prizes. The winner of each category with a valid motorsport karting license receives real world drives at T4 Nations Cup. “One of the main factors in the development of T4 Series is to bring affordable karting to the grass roots level,” noted Tillotson Engineer Mark Ffrench. “The T4 Esports program is a natural extension of that, where drivers can train and learn to drive in an even less expensive and more accessible virtual world while developing the skills necessary to compete in the real world.”

Tickets
Ticket prices and sales will be announced in June, but Tillotson has confirmed that drivers can purchase an all-inclusive arrive-and-drive package or bring their own kart and 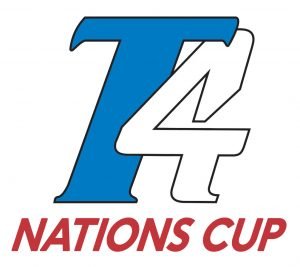 purchase an entry-only ticket. There are also other opportunities to win tickets to this year’s event through T4 Series national races being held leading up to the event. Check with your local T4 Dealer to find out more.