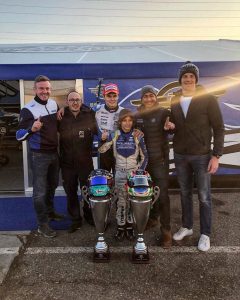 The 24th Winter Cup came to a successful conclusion under sun soaked skies at the South Garda Track in Lonato, Italy.  The event was one of the largest so far this year, with 310 verified drivers from 43 different countries

OK-Junior was dominated by the young Italian And 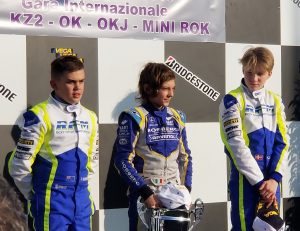 rea Kimi Antonelli (KR-Iame-Vega) for team Rosberg Racing Academy.  Fueled by the new Tillotson HC-116A, Antonelli lept out front early and never gave up ground.  Behind him, the podium was rounded off by the Australian James Wharton (FA-Vortex-Vega) and the Dane Conrad Laursen (FA-Vortex-Vega).

In non-Tillotson categories, the Frenchman  Anthony Abbasse (Sodikart-TM-Bridgestone) took the top position in KZ2 after a heavily contested race, with Paolo De Conto (CRG-TM-Bridgestone), who had started from the pole position, and Marco Ardigò (Tony Kart-Vortex-Bridgestone), who took the lead early on.  In the MiniROK category, the Jamaican Alex Powell (Energy) finished in first, with Russian Kirill Kutskov (Energy) in second and the Brit Coskun Irfan (Parolin) in third.