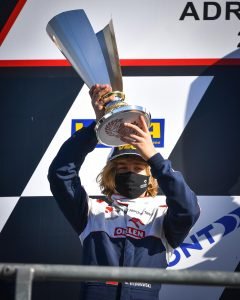 Polish driver ‘Gustav Wisniewski’ adopted the Tillotson’s HC-116 carburetor to get his season off to a flying start at the first round of the WSK masters series.  Wisniewski rose through the ranks on Saturday and Sunday to finish 2nd.  The polish pilot is part of the Sauber Karting racing team linep.  His full kit included the Tillotson HC-116 OKJ carburetor, a Kart Republic chassis and the Iame engine tuned by KVS . 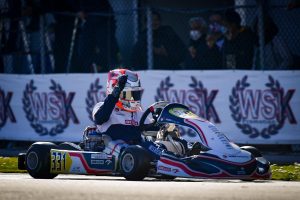 The WSK Master Series was held at the Adria international raceway circuit in beautiful spring-like conditions. The OKJ racing started with 93 pilots, with only the 34 highest ranked drivers making it to the final on Sunday afternoon.  Wisniewski started racing with the HC-116 on Saturday and earned a third place start on the grid after finishing a close second behind Rashid Al Daheri in prefinal B. Wisnieski made a good getaway in the final, taking second position on lap one. After pressuring Al Daheri for the lead of the race early on, The Parolin-TM driver’s pace proved too strong for Wisniewski. Wisnieski dropped to third late in the race after being passed by Russian driver Kirill Kutskov but regained the the 2nd position after Kutskov received a 5 second penalty for a dropped nose-cone.

The OK class saw Rafael Camara (Kart Rebublic/Iame) take the win using and Tilly HC-112 Carburettor. Its been an impressive start to the season for the  Brazilian as this was his second straight victory having won the WSK Champions Cup the previous weekend. Second place was another super result by Italian driver Eduardo Villa (TB Kart/TM) who used our latest HC-115 model. Tillotson products dominated the senior OK category where the top 15 finishers used Tillotson’s HC-112 or HC-115 models, Tillotson look to build on the positive result in the junior category.

The next round of the series takes place from the 11th to the 14th of March at the La Conca circuit in southern Italy.